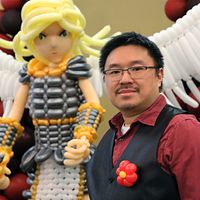 “There’s no limit to what one can create with balloons.”  This is the mantra of Derek Wong. His approach to balloon artistry is to keep learning and creating with no boundaries. He first discovered his love of balloons at a birthday party for a friend’s daughter. When Derek arrived, he had no idea his life was about to change. At the party was a clown making balloon sculptures for the children. Derek watched him work for two hours, fascinated by the things he created, seemingly out of nothing.  He says, “That was my very first time seeing someone make balloon creations,” and he wanted to know more!

Fueled by what he saw, he looked for as many resources as possible to learn as much as he could. One of the very first resources that Derek learned from was a Marvin Hardy booklet, as well as Google and YouTube. Derek scoured the internet, looking for tips, tricks, and tools that would enhance his trade. As Derek learned more and more about balloon artistry, he found his enthusiasm lay not just in the act of creation but also for the impression it made upon those around him. “I always like to create things and to amaze others, and I found that ballooning has a very unique media for creating things that can really make an impact.”

It’s Never Too Late to Learn Something New

It took about two years for Derek to grow from dabbler to professional – in 2013 he started his balloon business, Twisted Inflations, taking a hobby to a budding business. His completion of the Qualatex Certified Balloon Artist, or CBA, program, helped take his business to new heights. Though he started as a Twister, getting his CBA helped boost his services, and add decorating skills to his repertoire. He runs the business from his basement, with occasional help from his wife, and uses that space to make smaller creations. If he has a larger setup, he like other balloon artists will do an onsite installation.  Eventually, he found enough success to take the full jump, leave his desk job, and become a full-time balloon artist.

While working toward his CBA, Derek learned of the vast resources available to him through Pioneer Balloon Company. Among his many discoveries was the World Balloon Convention (WBC). He knew he had to go! He was not disappointed by his first experience. He was able to learn from the ‘legendary’ artists and meet other people who shared not only his passion but also the frustrations and joys that come with being a balloon artist. Derek explains, “The balloon industry isn’t very large compared to others, and balloon artists are scattered around the world. So sometimes, the only way we can meet with each other in person is through conventions. And there is no better way to learn and share and laugh with others that have the same mindset other than in conventions.” Derek’s experiences with WBC led him to bigger and better ideas and even further inspired his desire to learn and grow, to keep up with all of his new friends, mentors, and colleagues.

As Derek has grown and learned as an artist, he has been able to hone his skills and develop an expertise: precision and movement. He makes sure each creation has perfect proportions, as well as free movement. He also found that much of his original work is inadvertently influenced by Asian themes, partly because of his Asian background, and also because the first balloon artists he discovered are Japanese: Takehiro Kai and Rie Hosokai. He acknowledges this theme shows itself in many of his greatest works. His favorite creation centers on the idea of fear, both in its meticulous construction and in the character itself. Derek was called to create something “terrifying” for a Halloween event, so he decided to construct Pennywise the Clown from the movie It. To this day, this ghastly character is easily his most memorable creation.

Derek Wong has nowhere to go but up! From his very beginnings as a balloon artist, he has shown a serious excitement about this craft. When he sees an opportunity to learn, he jumps on it immediately, whether it’s a class, a social media site, or a convention. And it’s obvious that his hard work has paid off, as he has participated in and even placed in a variety of competitions, including:

So where will this perpetual student go from here? To great heights, obviously. To new students, he recommends a similar path to find success: “Attend a balloon convention, go to a local balloon jam, participate in a convention, or even meet with another balloon artist to see what others are doing.” We will continue to see great and unique things come from Derek Wong!

Your twisted creations will be heavenly with Chrome™ Balloons!

The sculpture I chose to demonstrate is my beaver design and its name is “Justin the Beaver.” It was my original design created for the 12-minute competition in Twist & Shout 2015 balloon convention, and it was my first time winning in the top 3 in a timed competition and in my very first Twist & Shout. It is still my favorite award-winning design, and it is easy to make and looks both realistic and adorable. And is my go-to design if anyone asked me to make something “Canadian.”